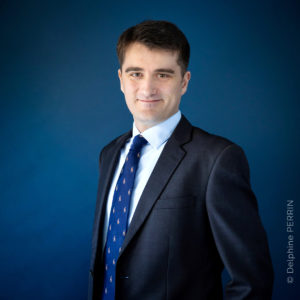 Jean-Nicolas Héraud started his career in 2007 as patent examiner engineer at INPI (the French Institute for Industrial Property), in the fields of physics and energy (thermodynamics, thermics, nuclear, well drilling, lighting).
Between 2013 and 2017, he managed an examining department composed of a dozen patent engineers in the fields of transport (automotive, aeronautics, space, rail).
At the same time, he worked in particular on the creation and development of in-house patent management software and acted as International Patent Classification (IPC) expert in the field of mechanics. He trained new patent engineers on the grant procedure in France. Through this experience, acquired over a period of ten years in INPI, he gained extensive expertise in the patent procedure in France.

Jean-Nicolas Héraud, who joined our team in 2017, works with LLR's national and international customers in the field of patent law. He drafts patent applications and follows up grant procedures in France, Europe and the rest of the world (mainly the United States and China), providing consultancy services to his customers on their industrial property strategy and performing patentability and freedom-to-operate studies.
He also takes responsibility for defence or valorization of the rights obtained, especially in opposition proceedings.

He is involved in a range of technical fields in mechanics and physics, mainly the following: